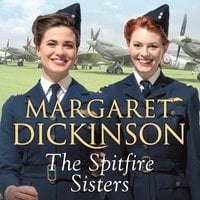 Family and friendship mean everything under the darkening skies of wartime Britain, by Sunday Times bestselling author Margaret Dickinson.

It is the 1930s and the Maitland family have spent the years following the Great War struggling to come to terms with its catastrophic aftermath, and their hopes now lie with the next generation. Their Lincolnshire village of Doddington suffered terrible loss and it has taken great courage for the bereaved families to rebuild their lives without their loved ones.

When war is declared again, it is Daisy Maitland and her peers who must now take up the fight for freedom. Feisty and a daredevil like her beloved Aunt Pips, who spent World War One on the front line serving with a flying ambulance corps, Daisy had persuaded a family friend to teach her to fly as a young woman. Now her country is at war, she is determined to put her skills to good use, enlisting in the Air Transport Auxiliary. There she forges new friendships – but she never forgets her childhood friend and cousin, Luke, who has joined the RAF as a fighter pilot.

As war rages in the skies and on the ground, Daisy, her friends and her family – at home and across the Channel – will find their bravery and strength tested to the very limits in their determination to save their country. And they have learned one of the most valuable lessons of all: true love will find a way.