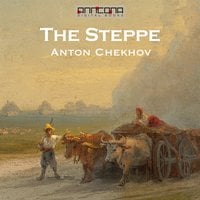 In a narrative that drifts with the thought processes of the characters, Chekhov evokes a chaise journey across the steppe through the eyes of a young boy sent to live away from home, and his companions, a priest and a merchant.

Little Yegorushka goes off to school for the first time, setting out on the journey in the company of his Uncle Ivan, the local priest Father Christopher, and the fun-loving servant Deniska.

Along the way they meet an extraordinarily colorful array of characters, named and nameless: the innkeeper Moisey Moisevitch, the beautiful Countess Dranitsky, the mysterious Varlamov, Emelyan the voiceless singer, Tit the steppe waif, and many more. But the most colorful and extraordinary character of all is the Steppe itself in every mood and weather, painted stroke-by-masterly-stroke by Chekhov in all its wild, musical, redolent, flowering, chirruping, infuriating exuberance.

The Steppe has been called a "dictionary of Chekhov's poetics", and it represented a significant advance for Chekhov, exhibiting much of the quality of his mature fiction and winning him publication in a literary journal rather than a newspaper.