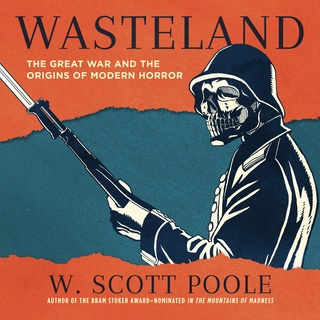 In the early twentieth century, World War I was the most devastating event humanity had yet experienced. New machines of war left tens of millions killed or wounded in the most grotesque of ways. The Great War remade the world’s map, created new global powers, and brought forth some of the biggest problems still facing us today. But it also birthed a new art form: the horror film, made from the fears of a generation ruined by war.

From Nosferatu to Frankenstein’s monster and the Wolf Man, from Fritz Lang, F. W. Murnau, and Albin Grau to Tod Browning and James Whale, the touchstones of horror can all trace their roots to the bloodshed of the First World War. Historian W. Scott Poole chronicles these major figures and the many movements they influenced. Wasteland reveals how bloody battlefields, the fear of the corpse, and a growing darkness made their way into the deepest corners of our psyche.

On the one-hundredth anniversary of the signing of the armistice that brought World War I to a close, W. Scott Poole takes us behind the front lines of battle to a no-man’s-land where the legacy of the War to End All Wars lives on.
Mer info om ljudboken:
Förlag: Blackstone Publishing
Utgiven: 2019-01-14
ISBN: 9781982558178
11T 30min
Engelska
Kategori: Historia

A House in the Mountains: The Women Who Liberated Italy from Fascism

The War to End All Wars

The Volunteer: One Man, an Underground Army, and the Secret Mission to Destroy Auschwitz

The Girl From Venice

The Russian Job: The Forgotten Story of How America Saved Russia from Famine

Cesare: A Tale of War-Torn Berlin

Kosmos 954 and Operation Morning Light: The History of Efforts to Contain Radioactive Debris Spread across Canada by a Soviet Satellite

The Unification of Italy: The History of the Risorgimento and the Conflicts that Unified the Italian Nation

Deranged: The Shocking True Story of America's Most Fiendish Killer