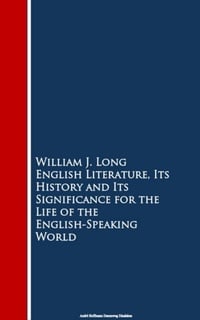 English Literature, Its History and Its Signi the English-Speaking World

English Literature, Its History and Its Signi the English-Speaking World

Författare: William J. Long
Format: Finns som e-bok
Engelska
5
This book, which presents the whole splendid history of English literature from Anglo-Saxon times to the close of the Victorian Era, has three specific aims. The first is to create or to encourage in every student the desire to read the best books, and to know literature itself rather than what has been written about literature. The second is to interpret literature both personally and historically, that is, to show how a great book generally reflects not only the author's life and thought but also the spirit of the age and the ideals of the nation's history. The third aim is to show, by a study of each successive period, how our literature has steadily developed from its first simple songs and stories to its present complexity in prose and poetry.

To carry out these aims we have introduced the following features: (1) A brief, accurate summary of historical events and social conditions in each period, and a consideration of the ideals which stirred the whole nation, as in the days of Elizabeth, before they found expression in literature.

(2) A study of the various literary epochs in turn, showing what each gained from the epoch preceding, and how each aided in the development of a national literature.

(3) A readable biography of every important writer, showing how he lived and worked, how he met success or failure, how he influenced his age, and how his age influenced him.

(4) A study and analysis of every author's best works, and of many of the books required for college-entrance examinations.

(5) Selections enough--especially from earlier writers, and from writers not likely to be found in the home or school library--to indicate the spirit of each author's work; and directions as to the best works to read, and where such works may be found in inexpensive editions.

(6) A frank, untechnical discussion of each great writer's work as a whole, and a critical estimate of his relative place and influence in our literature.
Mer info om e-boken:
Förlag: anboco
Utgiven: 2016-09-05
ISBN: 9783736413641
Engelska
5
Kategori: Fakta

English Literature for Boys and Girls

Shakespeare Basics for Grown-Ups: Everything You Need to Know About the Bard

The Taming of the Shrew

A History of English Literature

The Other Side of Midnight

The Book Club with Amit Varma

How to Talk to Anybody, Anytime, Anywhere

The Science Fiction Hall of Fame, Vol. 2-A

The Politically Incorrect Guide to English and American Literature