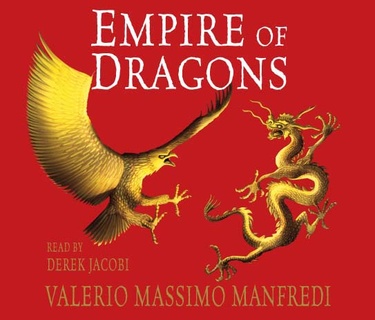 Författare: Valerio Massimo Manfredi
Inläsare: Derek Jacobi
Format: Ljudbok
5T 15min
Engelska
2,6
Valerio Massimo Manfredi's Empire of Dragons is set in Anatolia, AD 260. The Roman outpost of Edessa is on its last legs after the Persian siege, and Roman Emperor Publius Licinius Valerianus agrees to meet his adversary to negotiate peace. But the meeting is a trap and the Emperor ends up in enemy hands, along with the commander of his personal guard, Marcus Metellus Aquila, and ten of his most valiant and trusted men. Their destiny is sealed: they will rot away in a mine, forced into slavery.

But Metellus – legate of the Second Augusta Legion, hero of the empire – and his men break free and find shelter at an oasis, where they meet a mysterious, exiled prince. The Romans become the prince's private militia, agreeing to safeguard the prince's journey back to his homeland, Sera Maior, the mythical Kingdom of Silk –China.

And so they begin an extraordinary and epic journey through the forests of India, the Himalayan mountains, the deserts of central Asia, all the way to the heart of China – as the very survival of the world's greatest two empires is at stake.
Förkortad version
Mer info om ljudboken:
Förlag: Macmillan Digital Audio
Utgiven: 2006-11-17
ISBN: 9780230528109
5T 15min
Engelska
2,6
Kategori: Romaner
Historisk roman Historiska romaner Historiska äventyr

Betrayal: The Centurions I

The Talisman of Troy

The Gates of Rome

Flashman and the Mountain of Light

The Gates of Troy

The First Man in Rome