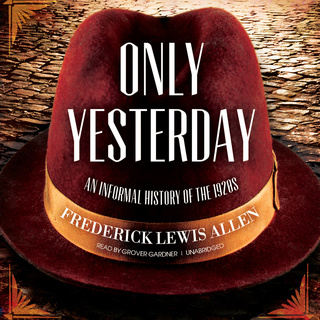 Författare: Frederick Lewis Allen
Inläsare: Grover Gardner
Format: Ljudbok
11T 35min
Engelska
Prohibition. Al Capone. The President Harding scandals. The revolution of manners and morals. Black Tuesday. These are only an inkling of the events and figures characterizing the wild, tumultuous era that was the Roaring Twenties. Originally published in 1931, Only Yesterday traces the rise of post–World War I prosperity up to the Wall Street crash of 1929 against a colorful backdrop of jazz, flappers, speakeasies, the first radio, and the scandalous rise of skirt hemlines. In this span between armistice and depression, Americans were kicking up their heels, but they were also bringing about major changes in the social and political structure of their country.

Hailed as an instant classic, this is Frederick Lewis Allen’s vivid and definitive account of one of the twentieth century’s most fascinating decades, chronicling a time of both joy and terror—when dizzying highs were quickly succeeded by heartbreaking lows. It is a fond, witty, penetrating biography of this restless decade—a delightful reminiscence for those who can remember and a fascinating firsthand look for those who have only heard.
Mer info om ljudboken:
Förlag: Blackstone Publishing
Utgiven: 2010-08-06
ISBN: 9781481597647
11T 35min
Engelska
Kategori: Historia
Historia USA

The Longest Line on the Map

The Glory and the Dream

A Christmas Far from Home

This Kind of War

America Aflame: How the Civil War Created a Nation

Freedom National: The destruction of Slavery in the United States, 1861-1865

The Lewis and Clark Journals

The Greater Journey: Americans in Paris

The Greatest Speeches of the Vietnam War