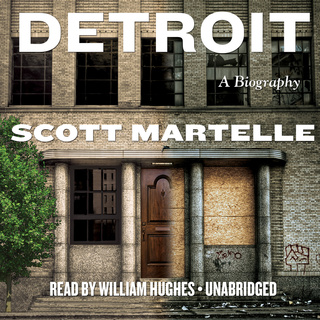 Författare: Scott Martelle
Inläsare: William Hughes
Format: Ljudbok
10T 5min
Engelska
2,67
When we think of Detroit, we think first of the auto industry and its slow, painful decline, then maybe the sounds of Motown, or the long line of professional sports successes. But economies are made up of people, and the effect of the economic downfall of Detroit is one of the most compelling stories in America.

Detroit: A Biography by journalist and author Scott Martelle is about a city that rose because of the most American of traits—innovation, entrepreneurship, and an inspiring perseverance. It’s about the object lessons learned from the city’s collapse, and most prosaically, it’s about what happens when a nation turns its back on its own citizens.

The story of Detroit encompasses compelling human dimensions, from the hope it once posed for blacks fleeing slavery in the early 1800s and then rural Southern poverty in the 1920s, to the American Dream it represented for waves of European immigrants eager to work in factories bearing the names Ford, Chrysler, and Chevrolet. Martelle clearly encapsulates an entire city, past and present, through the lives of generations of individual citizens. The tragic story truly is a biography, for the city is nothing without its people.
Mer info om ljudboken:
Förlag: Blackstone Publishing
Utgiven: 2012-04-01
ISBN: 9781481589901
10T 5min
Engelska
2,67
Kategori: Historia
USA

The Georgetown Set: Friends and Rivals in Cold War Washington

The Jihad Next Door

The Missile Next Door: The Minuteman in the American Heartland

All This Marvelous Potential: Robert Kennedy's 1968 Tour of Appalachia

Tomorrow-Land: The 1964–65 World’s Fair and the Transformation of America

City of Quartz: Excavating the Future in Los Angeles

Once In A Great City: A Detroit Story

The Day Wall Street Exploded: A Story of America in Its First Age of Terror

Bubble in the Sun: The Florida Boom of the 1920s and How It Brought on the Great Depression