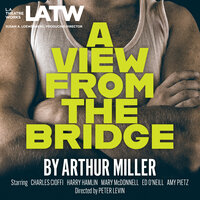 A View from the Bridge

Italian-American immigrant life in the 1950's textures Arthur Miller's searing drama of love and revenge. Longshoreman Eddie Carbone is devoted to his wife Beatrice and his niece Catherine. When Beatrice's impoverished Sicilian cousins enter the U.S. illegally, in hope of finding work, Eddie gives them a helping hand. But when Catherine and one of the cousins fall in love, Eddie's affection for his niece turns into obsession.

Includes a piece with author Nathan Ward about the real-life Brooklyn neighbrohood that inspired Arthur Miller to write A View from the Bridge.

Directed by Peter Levin. Recorded before a live audience at the DoubleTree Suites, Santa Monica in February of 1998.