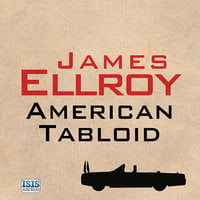 1958. America is about to emerge into a bright new age – an age that will last until the 1000 days of John F. Kennedy’s presidency. Three men move beneath the glossy surface of power, men allied to the makers and shakers of the era. Peter Bondurant – Howard Hughes’s right-hand man, Jimm Hoffa’s hitman. Kemper Boyd – employed by J. Edgar Hoover to infiltrate the Kennedy clan. Ward Littell – a man seeking redemption in Bobby Kennedy’s drive against organised crime. The festering discontent of the age that burns brightly in these men’s hearts will go into supernova as the Bay of Pigs ends in calamity, the Mob clamours for payback and 1000 days end in brutal quietus in 1963.