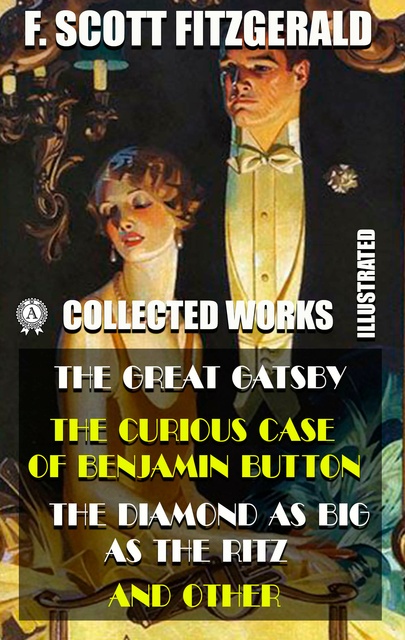 Collected Works of F. Scott Fitzgerald (Illustrated): The Great Gatsby, The Curious Case of Benjamin Button, The Diamond as Big as the Ritz, and other

Collected Works of F. Scott Fitzgerald (Illustrated): The Great Gatsby, The Curious Case of Benjamin Button, The Diamond as Big as the Ritz, and other

This collection compiles the works on which the fame of one of the most fascinating writers of the twentieth century was built. Francis Scott Fitzgerald became a mouthpiece for ideas and expressed the spiritual moods bubbling amongst the young people during the 1920s.
Fitzgerald, in the words of Amory from This Side of Paradise (1920), wrote that a generation had "grown up to find all God's dead, all wars fought, all faiths in man shaken". Fitzgerald was the first to tell the world about the commencement of the "jazz age" with its carnival approach towards life- a lifestyle which he also followed. However, as a sensitive artist, he could not help but notice the dualistic nature of this philosophy. Fitzgerald's writing demonstrated that a life spent at the carnival would inevitably lead to bankruptcy. Fitzgerald often worked on multiple short stories simultaneously while writing his novels. Later, these stories were compiled. His relationship and love for his wife Zelda fueled much of his writing. Her diagnosis and hospitalization for schizophrenia in 1930 affected him greatly.In his later years, Fitzgerald worked in Hollywood on movie scripts. His last novel, The Last Tycoon, remained unfinished at the time of his death in 1940 and reflected his Hollywood experiences.
Contents:
The Great Gatsby
The Curious Case of Benjamin Button
The Offshore Pirate
The Camel's Back
The Diamond as Big as the Ritz
The Jelly-Bean
May Day
Porcelain and Pink
Tarquin of Cheapside
Oh Russet Witch!
The Lees of Happiness
Mr. Icky
Jemina, The Mountain Girl