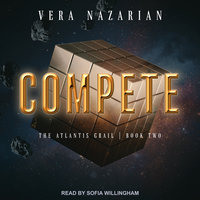 It's one thing to Qualify... But do you have what it takes to Compete?

With Earth about to be destroyed by an extinction level asteroid, teenage nerd, geek, and awkward smart girl Gwen Lark, barely Qualified for rescue onboard one of the thousands of ark-ships headed to the ancient colony planet Atlantis.

Now faced with a year-long journey in space, life in a wondrously alien environment, and many tough life choices, Gwen must decide who or what she will become. Fleet Cadet or Civilian? Friend or lover? Average or extraordinary?

Can she make new friends? Can she trust the old ones, such as Logan Sangre, her sexy high school crush and an Earth special operative?

Time and time again, Gwen's uncanny ability to come up with the best answer in a crisis saves her life and others. And now, her unique Logos voice makes her an extremely valuable commodity to the Atlanteans-so much so that her enigmatic commanding officer Aeson Kassiopei, who is also the Imperial Prince of Atlantis, has taken an increasingly personal interest in her.

Before the end of the journey, Gwen must convince him that she has what it takes to compete in the deadly Games of the Atlantis Grail.