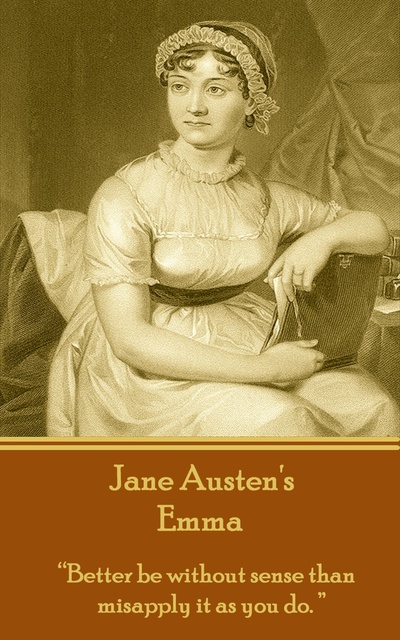 Emma: "Better be without sense than misapply it as you do."

Emma: "Better be without sense than misapply it as you do."

Jane Austen’s Emma (1815) explores the life of women in Regency England, combining romance with some aspects of the comedy of manners. The story centers around the eponymous character who, unlike Austen’s other popular heroines, is an upper middle-class young woman with no pecuniary concerns. Emma Woodhouse is rather a strong-headed, beautiful young woman who lives with her father and who has resolved not to marry. Yet, she spends considerable time and energy trying to make matches for the other people around her and tends to draw amusement and satisfaction from such practice. After one successful experience, Emma tries to match her friend Harriet to a man named Mr. Elton. Her earnest and honest friend George Knightley warns her of Mr. Elton’s snobbish nature. Nonetheless, Emma starts by making her friend Harriet reject a marriage proposal. Surprisingly, while she believes Mr. Elton’s attention is drawn towards Harriet, the man ends up declaring his love for the match-maker herself. When Emma informs Mr. Elton of her intention to match him to her friend, he feels insulted, considering Harriet’s inferior social class. He leaves the town while Emma keeps on trying to find a husband for Harriet. By the end of the novel, Emma marries Mr. Knightley to finally give up her favorite hobby while Harriet marries Robert Martin. We’ve also included a concise and informative biography of Jane’s works and life at the end of the book. We hope it helps to give a little context and colour about how her life interacted with her art.