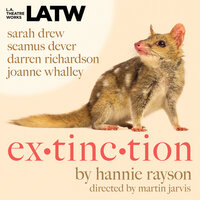 A zoologist in Australia gets funding to save an endangered species from the very company that threatens its existence. Will this deal with the devil allow her to save the species, or will it destroy her entire life's work?

Recorded at The Invisible Studios, West Hollywood, in September 2020.

Extinction is part of L.A. Theatre Works’ Relativity Series of science-themed plays. Lead funding for the Relativity Seriesis provided by the Alfred P. Sloan Foundation, bridging science and the arts in the modern world.