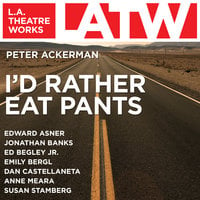 What do fast-talking, New York octogenarians Abe and Mabel do when their life-long grocery store, Pepperstein Produce, is driven out of business by Wonder Food? They embark on the ultimate road trip to Los Angeles with a nineteen-year-old stoner named Wisdom to become actors, of course.

Directed by Gordon Hunt. Recorded live before an audience at the Museum of Television and Radio, Beverly Hills in November of 2002.