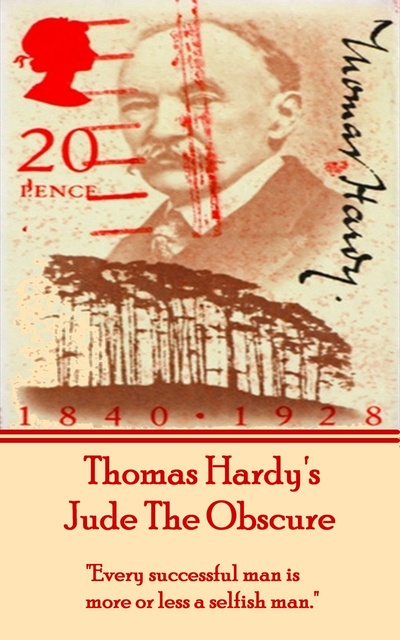 Jude The Obscure, By Thomas Hardy: "Every successful man is more or less a selfish man."

Jude The Obscure, By Thomas Hardy: "Every successful man is more or less a selfish man."

Thomas Hardy (2nd June 1840 – 11th January 1928), celebrated poet and writer, was born in a modest thatched cottage near Dorchester in the West country, to a builder father. His mother came from a line of intelligent, lively and ambitious women so ensured her son had the best formal education available for their modest means although this ended when he was 16. He became a draughtsman specialising in the building of churches was able to give it up to be a full time writer and poet with the publication of Far From the Madding Crown which became a bestseller and like much of his work was serialised. His writing reflects his passionate beliefs for social reform and exposes the hypocrisy of the rules of the Victorian age which constrained many freedoms with convention and restricted the transcending of class boundaries. His novels are almost entirely set in rural Wessex which although fictional is clearly rooted in the SW counties of England where he was born and lived most of his life. Hardy’s writing caused controversy in his lifetime but despite this he was highly praised and showered with honorary doctorates from many universities, a knighthood, which he refused and in 1910 the prestigious Order of the Merit. Jude the Obscure is ”the sort of man who was born to ache a good deal.” He is desperate to study at Christminster, the fictionalised Oxford University, and whilst self educated to a sufficient standard, his humble rural background prevents admission. Furthermore, he is distracted by the sensual Arabella and falls in love with the educated. emancipated new woman, Sue creating as Hardy states “a deadly war waged between flesh and spirit”. Whilst doomed love and unfulfilled ambition are the dominant themes, the frank criticism of marriage and fearless exploration of sexuality caused so much protest for its supposed indecency and the ensuing bitter criticism, made this Hardy’s final novel and many agree also his finest. The novel continues to inspire the modern mind as the recent film directed by Michael Winterbottom and starring Christopher Eccleston and Kate Winslet as Jude and Sue attests.