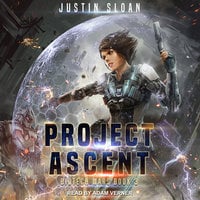 War on the Streets, War in Space

They thought revealing New Origins' plans would be enough, that they could go on to live normal lives. But nobody knows Space Station Horus like Marick and Alicia, and they're asked to lead the assault.

It's time to return to space, now with an army at their backs.

Meanwhile, their war isn't the only one they have to worry about, as the criminal leader of Space Station Ramiel is on a warpath against Marick and any who would stand on his side.

But now he has his own team, a ragtag group of enhanced super soldiers, hackers, and former criminals with access to alien technology that just might give them a chance against the overwhelming forces that stand against them.

New Origins will try to kill him and his wife, but he won't stop until he's torn them from their elite spot in the skies and sent them six feet underground.