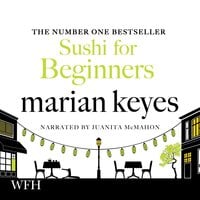 'Dammit,' she realized. 'I think I'm having a nervous breakdown.'

Lisa Edwards' career as a hot-shot magazine editor is destined for high-rise New York, when suddenly she's blown off-course into the delights of low-rise Dublin. But what on earth can she do about it? Ashling Kennedy, Lisa's super-organized assistant, is good at worrying. Too good. She's even terrified of a little bit of raw fish . . .Clodagh Kelly is Ashling's best friend and has done everything right: beautiful kids and a husband come prince - everything in fact that Ashling has ever wanted. She should be happy. But she isn't.

Three women on the verge of happiness and even closer to a complete breakdown . . .Which way will they fall?
Totally addictive.’ Sunday Express

'Keyes has given romantic comedy a much-needed face-lift. Chatty and warmhearted, Keyes's talent is to tell it how it is' Independent

'The voice of a generation' Daily Mirror