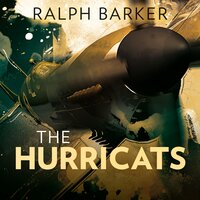 'An unforgettable tale of high-stakes action, ingenuity and raw courage. This war story's got it all' Rowland White, Author of Vulcan 607

'IF WE FAIL IN THIS, THEN WE LOSE THE WAR'

With the Battle of Britain won, Winston Churchill and his military chiefs faced an even more fearsome challenge in the Battle of the Atlantic.

Thwarted in his plans to invade, Hitler decided he would starve Britain into submission instead. Operating in conjunction with U-Boats, long-range Condor aircraft manned by élite German airmen attacked Allied ships far beyond the range of any land-based RAF fighters, with devastating results.

To counter the Luftwaffe threat, men from the RAF and Fleet Air Arm were asked to volunteer to be catapulted from the foredecks of merchant ships in specially modified Hawker Hurricanes. But with nowhere to land afterwards, it was a one-way mission.

If the British fighter pilots survived combat, they would have no option but to bail out into the North Atlantic and hope they were picked up by the one of the convoy escorts.

Survival was anything but certain ...