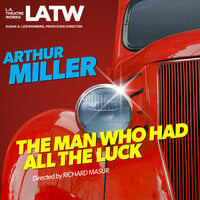 Arthur Miller's off-beat fable about David Beeves, a young Midwesterner who has good fortune shine on him while it passes others by. When will David's luck run out...and at what price?

Directed by Michael Hackett. Recorded before a live audience at the Skirball Cultural Center, Los Angeles in April of 2007.