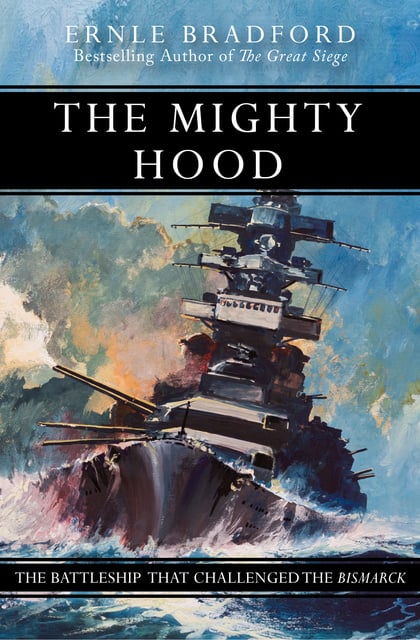 The Mighty Hood: The Battleship that Challenged the Bismarck

The Mighty Hood: The Battleship that Challenged the Bismarck

The story of the HMS Hood, the last great warship of the British Royal Navy, told by the bestselling author of Hannibal.

When it was launched in 1918, the HMS Hood was the flagship of the Royal Navy. As a battle cruiser, “The Mighty Hood” was fast enough to evade enemy cruiser ships and powerful enough to destroy them. But for all the Hood’s might, it had one fatal flaw: armor had been sacrificed for speed.

In 1941, the Hood confronted the legendary German warship Bismarck. A salvo from the enemy penetrated the Hood’s ammunition magazine, destroying the British ship and killing all but three of its crew. The brutal defeat marked the end of the Royal Navy’s dominance. But it also inspired Winston Churchill’s vow to sink the Bismarck—a vow that in time was fulfilled.

Through oral history and documentary research, Ernle Bradford chronicles the Hood’s career from design to demise, with colorful insight into life aboard the ship as well as its broader historical significance.