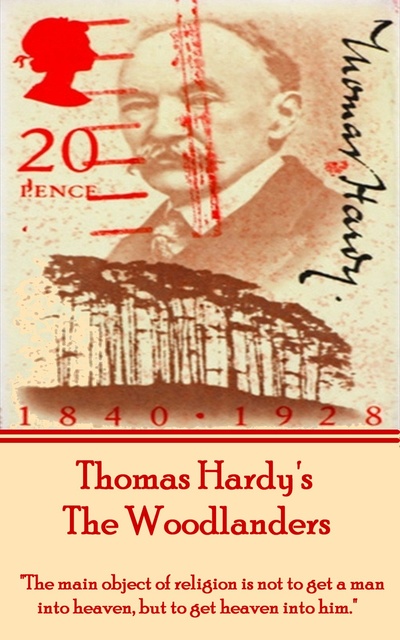 The Woodlanders, By Thomas Hardy: "The main object of religion is not to get a man into heaven, but to get heaven into him."

The Woodlanders, By Thomas Hardy: "The main object of religion is not to get a man into heaven, but to get heaven into him."

Thomas Hardy (2nd June 1840 – 11th January 1928), celebrated poet and writer, was born in a modest thatched cottage near Dorchester in the West country, to a builder father. His mother came from a line of intelligent, lively and ambitious women so ensured her son had the best formal education available for their modest means although this ended when he was 16. He became a draughtsman specialising in the building of churches was able to give it up to be a full time writer and poet with the publication of Far From the Madding Crown which became a bestseller and like much of his work was serialised. His writing reflects his passionate beliefs for social reform and exposes the hypocrisy of the rules of the Victorian age which constrained many freedoms with convention and restricted the transcending of class boundaries. His novels are almost entirely set in rural Wessex which although fictional is clearly rooted in the SW counties of England where he was born and lived most of his life. Hardy’s writing caused controversy in his lifetime but despite this he was highly praised and showered with honorary doctorates from many universities, a knighthood, which he refused and in 1910 the prestigious Order of the Merit. The relationship between man and trees is a recurrent theme in Hardy’s work and here in The Woodlanders it is explored in depth with the characters being fellow inhabitants with the trees and their struggles interconnected with the trees. Set in the familiar Dorset landscape this novel follows the fortunes of Giles Winterbourne, a good hearted native of the area who works as a yeoman. His childhood sweetheart Grace Melbury has been away to private school and stayed on as a governess. On her return Giles’ love for her is challenged by rival, Edred Fitzpierrs, a young and dashing doctor who wins her hand in marriage. This match is an unhappy one and affects the woodland community in this extraordinary novel.