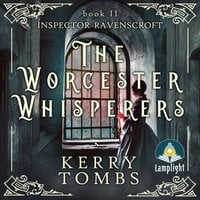 Jack the Ripper is terrifying London. Outside the capital, another killer will shock the country. It’s up to Police Inspector Samuel Ravenscroft to stop him. Perfect for fans of M.R.C. Kasasian, E.S. Thomson, Oscar De Muriel and Karen Charlton.

Worcester, 1888. Nicholas Evelyn, the elderly cathedral librarian, has disappeared. A priceless medieval manuscript has been stolen. Its glass case smashed with a candlestick. Ravenscroft is sent from the grimy streets of Whitechapel to investigate. Aided by his trusty companion Constable Tom Crabb, Ravenscroft soon discovers that behind the cathedral’s facade lurks a dark world of death and deceit. Could the murder relate to an unsolved mystery dating back nearly forty years? Meanwhile, in London, a mysterious woman in black is wreaking revenge in the dark alleyways of Whitechapel. In a spectacular climax, the two worlds of Worcester and Whitechapel meet.