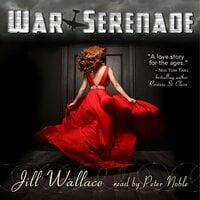 Pietro Saltamachio is on top of the world as a bon vivant Italian opera star until he's forced to fly planes for his country in World War II. Shot down, captured and confined in an Allied POW camp in South Africa, though Pietro' injuries mend, his spirit remains broken. He's lost his passion for music and has nothing left to live for—until he sees a redheaded angel through the razor barrier.

Iris Fuller dreams of pursuing a career across the sea, but she's doing her bit for the Allied war effort by volunteering as a lowly nurse’s aide. Thoroughly reluctant to mingle with the enemy, she’s instructed to inoculate prisoners at the nearby camp. Iris is entirely unprepared for the dark-haired prisoner’s mesmerizing stare to set her world on fire.

That brief encounter begets Pietro's urge to find his voice. But the lengths he must go to triumph over the camp's sadistic leader and win Iris's love, seem beyond human endurance ... even as Iris, desperate for word of her brother's fate in the war, can't imagine loving an enemy from the country that could be responsible for his death.

Their desperate longing drives them toward a secret rendezvous, and the dangers multiply. If they are caught, Pietro faces death for escape; Iris, charges of treason.

Inspired by a true story, War Serenade is compelling, heart-wrenching, sometimes funny and always dramatic as it celebrates the endurance of the human spirit, the evolution of rich friendships, and love’s triumph against impossible odds.

War Serenade, is a true-story-inspired, ultimately feel-good novel that’s won multiple awards including: Winner for Historical Fiction 2018 - Online book club; Best First Book in Golden Quill Contest 2019; was a finalist in The Independent Author Network for Outstanding Fiction in 2018 and many others. The audio version won N’Dtale’s Rone Award in 2020. The print copy, e-book, and audio book are all available from the Amazon Bookstore.