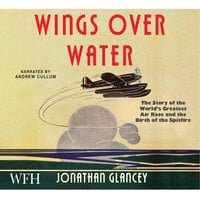 Wings Over Water: The Story of the World’s Greatest Air Race and the Birth of the Spitfire

Announced in 1912, the Schneider Trophy was a series of glamorous air contests, popularly known as races, that captivated both sides of the Atlantic. While there were many other aviation competitions, the Schneider proved to be, after a rocky start, by far the most memorable attracting a hugely popular and glamorous following whether Trophy races were held in Monaco, the Venice Lido, the Solent or Chesapeake Bay.

The Schneider Trophy was a focus not just of remarkable aircraft, derring-do pilots and swooning public attention, but also of fierce rivalries between the competitors: Britain, France, Italy and the United States. It gripped the imaginations of pioneering manufacturers and two of the world's finest aircraft designers ­- Reginald Mitchell and Mario Castoldi - who worked feverishly hard to outdo one another. Perhaps inevitably, the dynamism of rival engineering and politics led to the most potent military fighters of World War Two with Reginald Mitchell's record-breaking Supermarine seaplanes morphing, one way or another, into the Spitfire.

Wings Over Water not only tells the story of the Schneider Trophy afresh but also examines the backdrop and legacy of these legendary air races, which became a driver and celebration of speed and engineering prowess for both sea and ground-based aircraft. It is an exhilarating tale of raw adventure, public excitement, engineering genius and the fortunes of flying boats and seaplanes.