Woman in Sacred History: A Series of Sketches Drawn from Scriptural, Historical, and Legendary Sources

Woman in Sacred History: A Series of Sketches Drawn from Scriptural, Historical, and Legendary Sources

In a series of biographical sketches, Stowe weaves a story of womanhood, describing Christianity’s influence on the female image.

This religious portrayal begins with the Biblical story of Abraham’s wife Sarah, working its way up to the heroines of the New Testament, most notably King Herod’s Daughter, Mary Magdalene and Mary, mother of Jesus.

The book portrays the relentless spirit of females in everything they have had to endure and conquer throughout history. While at the same time creating a connection between these historical figures and modern day women in the exploration of themes such as family and identity.

Preceding any modern feminist revolutions, Stowe’s collection is a must read for anyone who wants to learn about the history and expectations of half the population: women. 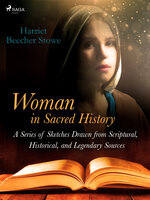