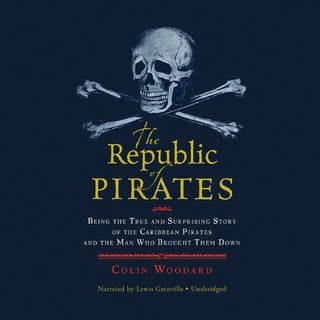 The Republic of Pirates

The Republic of Pirates

In the early eighteenth century, the Pirate Republic was home to some of the great pirate captains, including Blackbeard, “Black Sam” Bellamy, and Charles Vane. Along with their fellow pirates—former sailors, indentured servants, and runaway slaves—this “Flying Gang” established a crude but distinctive democracy in the Bahamas, carving out their own zone of freedom in which servants were free, blacks could be equal citizens, and leaders were chosen or deposed by a vote. They cut off trade routes, sacked slave ships, and severed Europe from its New World empires. And for a brief, glorious period, the Republic was a success.
Lisätietoa äänikirjasta:
Julkaisija: Blackstone Publishing
Julkaisuvuosi: 2015-10-30
ISBN: 9781602832565
13T 26M
Englanti
4
Kategoria: Elämäkerrat

Under the Black Flag: The Romance and the Reality of Life Among the Pirates

The Gentle Tamers: Women of the Old Wild West

The Bourbon King: The Life and Crimes of George Remus, Prohibition's Evil Genius

Charlie One: The Story of an Irishman in the British Army and His Role in Covert Counter-Terrorism Operations

Why They Do It: Inside the Mind of the White-Collar Criminal

Overground Railroad: The Green Book and the Roots of Black Travel in America

Columbus and the Quest for Jerusalem

To Conquer the Air: The Wright Brothers and the Great Race for Flight

A General History of the Pyrates