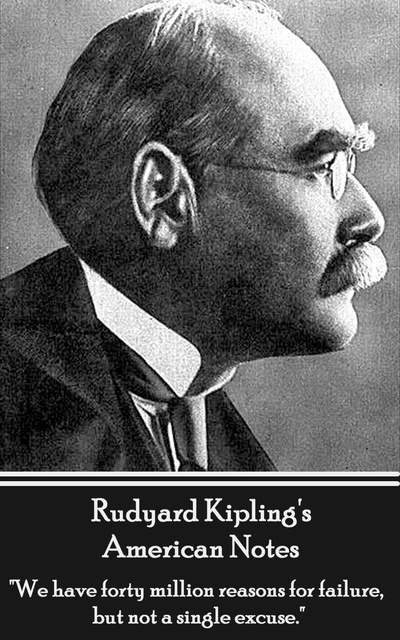 American Notes: "We have forty million reasons for failure, but not a single excuse."

American Notes: "We have forty million reasons for failure, but not a single excuse."

Published in 1891, Rudyard Kipling’s American Notes is a travelogue written after the British author’s journey across the United States of America. The journey took place two years before the publication of the book and was marked by impression and astonishment at the striking differences between British and American societies and ways of life. The travelogue is composed of seven essays that delve into minute descriptions of Americans and their customs. Kipling combines his observations with humorous and even sarcastic tones at times. These essays include “At the Golden Gate,” “Chicago,” and “American Salmon.” The author also speaks about the characteristics of American industries and about the American army as well as about the liberal behavior of American ladies who do not seem to be much concerned with the issue of marriage. Some of Kipling’s criticism could be quite shocking and rude for Americans, yet once the readers get used to his sarcastic style, the journey can only become much enjoyable. In a chapter entitled “American Politics,” Kipling also criticizes the American political system which he considers to be rather a parody of democracy. Despite all the strange impressions recorded in the travelogue, Kipling ends up declaring his love for Americans and for their remarkable ambitions and pursuits of happiness.