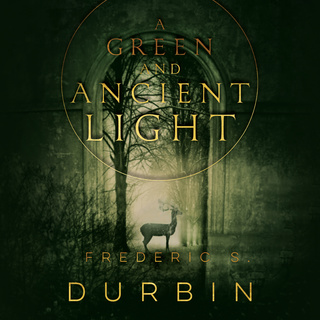 A Green and Ancient Light

A Green and Ancient Light

Author: Frederic S. Durbin
Narrator: Matthew Lloyd Davies
Format: As audiobook & As e-book
10H 9Min
English
4
A gorgeous fantasy in the spirit of Pan’s Labyrinth “that will appeal to those who loved Neil Gaiman’s The Ocean at the End of the Lane and John Connolly’s The Book of Lost Things” (Library Journal, starred review).

Set in a world similar to our own, during a war that parallels World War II, A Green and Ancient Light is the stunning story of a boy who is sent to stay with his grandmother for the summer in a serene fishing village. Their tranquility is shattered by the crash of a bullet-riddled enemy plane, the arrival of grandmother’s friend Mr. Girandole—a man who knows the true story of Cinderella’­s slipper—and the discovery of a riddle in the sacred grove of ruins behind grandmother’s house. In a sumptuous idyllic setting and overshadowed by the threat of war, four unlikely allies learn the values of courage and sacrifice.
More information about the audiobook:
Publisher: Dreamscape Media, LLC
Published: 2019-08-12
ISBN: 9781974978557
More info about the ebook
Publisher: Gallery / Saga Press
Published: 2016-06-07
ISBN: 9781481442244
10H 9Min
English
4
Category: Fantasy & SciFi
Fairy tales Historical Fantasy

A Song for Arbonne

The Haunting of Tram Car 015

The Sisters Grimm: A Novel

The Order of the Pure Moon Reflected in Water

Nine of Stars: A Wildlands Novel

Mark of the Raven

Strange Devices of the Sun and Moon