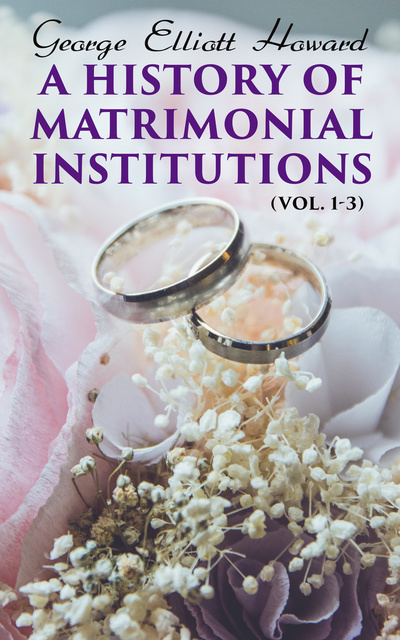 "A History of Matrimonial Institutions" is a book based on the author's belief that a thorough understanding of the social evolution of many people must rest upon the broader experience of mankind and that the human family, in particular, with all that the word connotes, is commanding greater attention. Accordingly, in the first part, the attempt is made to present a comprehensive and systematic analysis of the literature and the theories of primitive matrimonial institutions, while the second and the third part feature the history of matrimonial institutions in England and in the United States.

Analysis of the Literature and the Theories of Primitive Matrimonial Institutions:

Theory of the Horde and Mother-Right

Theory of the Original Pairing or Monogamous Family

Rise of the Marriage Contract

Rise of Ecclesiastical Marriage: The Church Accepts the Lay Contract and Ceremonial

The Protestant Conception of Marriage

History of Separation and Divorce under English and Ecclesiastical Law:

The Early Christian Doctrine and the Theory of the Canon Law

The Protestant Doctrine of Divorce

Law and Theory during Three Centuries

Matrimonial Institutions in the United States:

Optional Civil or Ecclesiastical Marriage in the Middle Colonies

Divorce in the American Colonies

A Century and a Quarter of Marriage Legislation in the United States, 1776-1903

A Century and a Quarter of Divorce Legislation in the United States:

The Southern and Southwestern States

The Middle and the Western States

Problems of Marriage and the Family:

The Function of Legislation

The Function of Education…