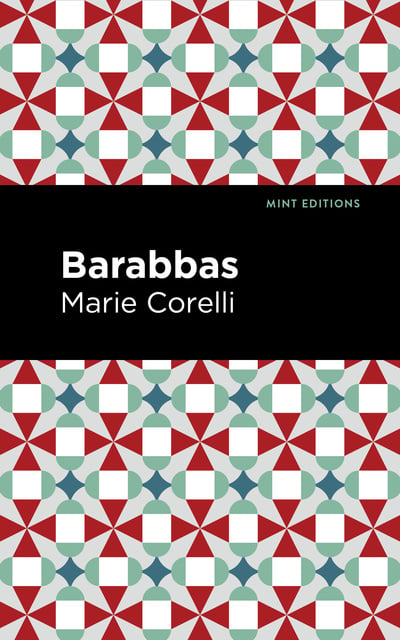 Barrabas (1896) is a novel by Marie Corelli. Published at the height of Corelli’s career as one of the most successful writers of her generation, Barrabas combines Biblical fiction, spirituality, and tragedy to tell the story of the crucifixion from the perspective of the man who was spared. Due for reassessment by a modern audience, Marie Corelli’s work—which has inspired several adaptations for film and theater—is a must read for fans of nineteenth century fiction.

“The heavy heat was almost insupportable, and a poisonous stench oozed up from the damp earth-floors of the Jewish prison, charging what little air was there with a deadly sense of suffocation. Down in the lowest dungeons complete darkness reigned, save in one of the cells allotted to the worst of criminals…” In one of these cells, the thief Barrabas awaits punishment for his crimes. Expecting death, he goes through phases of despair and rage, trying with all his might—and failing—to break his heavy chains. In another cell, Jesus himself awaits his trial.

While their stories are well known, and despite the infamy associated with such names as Judas and Pontius Pilate, Corelli does her best to provide a unique angle on Jesus’ crucifixion, focusing on Barrabas, the man who was spared. Addressing philosophical, historical, and religious themes, Barrabas is a moving work of fiction which asks important questions about faith, guilt, and the meaning of Christian sacrifice.

With a beautifully designed cover and professionally typeset manuscript, this edition of Marie Corelli’s Barrabas is a classic work of English historical fiction reimagined for modern readers.