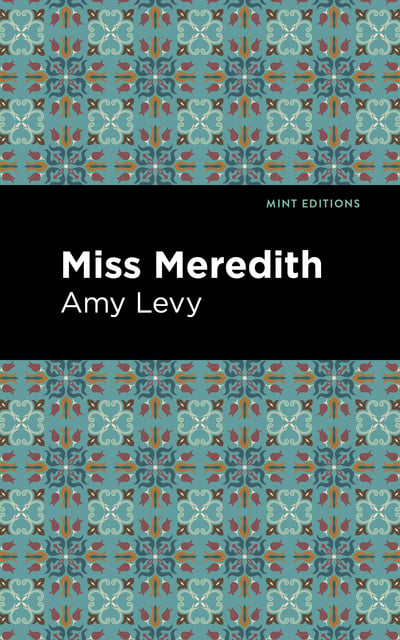 Miss Meredith (1889) is a novel by Amy Levy. Published the year of her tragic death, Miss Meredith is the final novel of a pioneering writer and feminist whose poetry and prose explores the concept of the New Woman while illuminating the realities of Jewish life in nineteenth century London. “A hard fight with fortune had been my mother's from the day when, a girl of eighteen, she had left a comfortable home to marry my father for love.

Poverty and sickness—those two redoubtable dragons—had stood ever in the path. Now, even the love which had been by her side for so many years, and helped to comfort them, had vanished into the unknown. ” Elsie Meredith is keenly aware of her mother’s fate in life, and although she wants to be there for her in her time of greatest need, she fears more than anything the prospect of following in her footsteps. “Neither literary nor artistic, neither picturesque like Jenny nor clever like Rosalind, ” Elsie is a textbook middle child, destined to go through life on her own terms, yet unequipped with the drive or willingness to conform possessed by her sisters.

On a whim, she decides to embark for Italy to work as a governess for the Marchesa Brogi. With a beautifully designed cover and professionally typeset manuscript, this edition Amy Levy’s Miss Meredith is a classic work of British literature reimagined for modern readers.