Not Good for Maidens

Not Good for Maidens

Beneath the streets of York, the goblin market calls to the Wickett women—the family of witches that tends to its victims. For generations, they have defended the old cobblestone streets with their magic. Knowing the dangers, they never
entered the market—until May Wickett fell for a goblin girl, accepted her invitation, and became inextricably tied to the world her family tried to protect her from. The market learned her name, and even when she and her sister left York for Boston to escape it, the goblins remembered.

Eighteen years later, Lou, May’s niece, knows nothing of her magical lineage or the twisted streets, sweet fruits, and incredible jewels of the goblin market. But just like her aunt, the market calls to her, an echo of a curse that won’t release its
hold on her family. And when her youngest aunt, Neela, is kidnapped by goblins, Lou discovers just how real and dangerous the market is.

To save her, both May and Lou will have to confront their family’s past and what happened all those years ago. But everything—from the food and wares, to the goblins themselves—is a haunting temptation for any human who manages to
find their way in. And if Lou isn’t careful, she could end up losing herself to the market too. 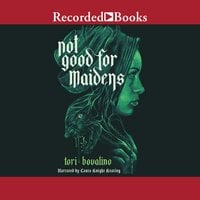