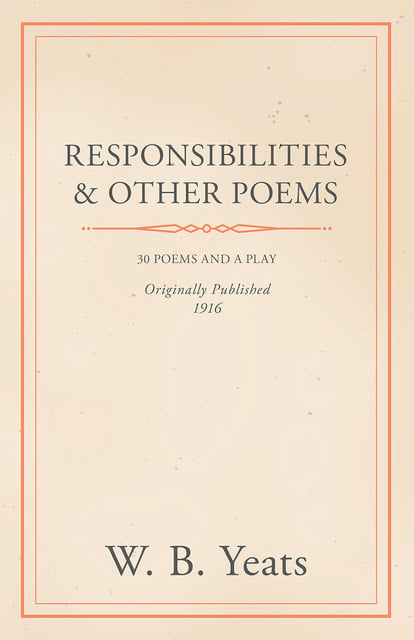 Responsibilities and Other Poems

Responsibilities and Other Poems

"Responsibilities and Other Poems" is a 1916 collection of poetry by Yeats. William Butler Yeats (13 June 1865 - 28 January 1939) was an Irish poet and one of the most prolific literary figures of the 20th-century. At the forefront of both the British and Irish literary movements, he co-founded the Abbey Theatre and was, along with Lady Gregory, Edward Martyn and others, a driving force behind the Irish Literary Revival. In his later life, Yeats also served as a Senator in Ireland. This fantastic volume is highly recommended for all lovers of poetry, and it is not to be missed by readers with an interest in the Irish Literary Revival. Contents include: "Responsibilities, 1912-1914", "Introductory Rhymes", "The Grey Rock", "The Two Kings", "To A Wealthy Man", "September 1913", "To a Friend whose Work has come to Nothing", "Paudeen", "To a Shade", "When Helen Lives", "The Attack on 'The Playboy of the West World", "The Three Beggars", "The Three Hermits", "Beggar to Beggar Cried", etc. Many vintage books such as this are becoming increasingly scarce and expensive. It is with this in mind that we are republishing this volume now in an affordable, modern, high-quality edition complete with a specially commissioned new biography of the author.