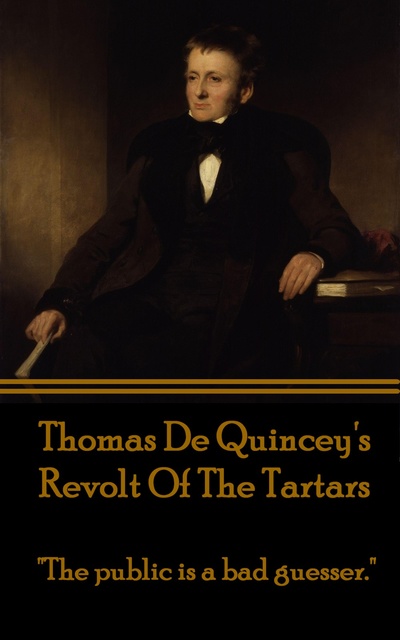 Revolt Of The Tartars: "The public is a bad guesser."

Revolt Of The Tartars: "The public is a bad guesser."

Revolt of the Tartars is a historical novella – though classified by some critics as a “historical essay” – written by the author of the celebrated bestselling classic Confessions of an English Opium-Eater, Thomas de Quincey. The book is subtitled “Or, Flight of the Kalmuck Khan and His People from the Russian Territories to the Frontiers of China.” It recounts events that happened in the late eighteenth century. For de Quincey, “there is no great event in modern history, or, perhaps it may be said more broadly, none in all history […] than the flight eastwards of a principal Tartar nation across the boundless steppes of Asia in the latter half of the last century.” This is how the author starts relating this factual epic that he adorns with a refined literary style along with biblical and Miltonic allusions. The book delves into the minute details of the Mongols’ long march from Russia back to their historical China, creating suspense by making his heroes among “the Torghuts,” “the Eleuths,” “the Ayoukis” and “the Tse-Ouang-Raptan” relive the dramatic moments. De Quincey’s work gives the impression of being well-documented as it is believed to have been based on the personal memoirs of the period’s Chinese Emperor himself.