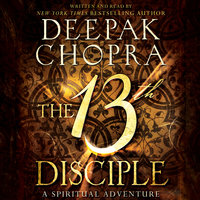 The New York Times bestselling author of Buddha and Jesus weaves together historical narrative, mystery, exciting adventure, and intrigue in this masterfully told novel that reveals surprising discoveries about the unknown last disciple of Christ, and a new understanding of who Jesus was in his final days.

When a solid gold reliquary missing from a church in Belgium suddenly resurfaces in America, a young newspaperman begins to investigate the story. At first, it seems like just another case of a treasure stolen during World War II that has resurfaced. But it soon becomes apparent that much more is at stake.

Hidden within the medieval reliquary is a gold box that holds a sacred relic—a single finger bone—from an anonymous saint. Why would the remains of someone unknown to the Church be considered holy? The search for answers leads to a shocking discovery—a dangerous secret known only to a small band of people. If one touches the reliquary, a sacred vision is received—a vision involving a young girl who had a chance encounter with Jesus just before he was crucified.

The few people who have been blessed with these miraculous messages have banded together into a mysterious school, a closed society that preserves this venerated wisdom. But their knowledge of the young girl and Jesus is at once so fascinating yet so highly controversial that it cannot be shared with the world.

This young girl, curious about the charismatic man named Jesus, embarks on a quest to find out who he really was. What she finds—the knowledge the society protects—is at times far different from the accepted gospels. Could this unknown girl be the 13th Disciple—the last and truest apostle of Christ?