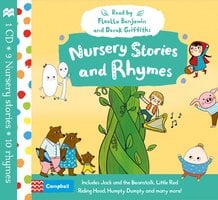 Read by two of the nation's favourite children's TV presenters, this is a delightful collection of favourite nursery rhymes and traditional stories.

Climb up the beanstalk with Jack, march with the Duke of York and visit the bears with Goldilocks in Nursery Stories and Rhymes! With an approximate running time of 60 minutes, these popular tales and rhymes read and sung by well-known children's TV presenters Floella Benjamin and Derek Griffiths, with added sound effects and music, will keep children listening again and again, at home or in the car.