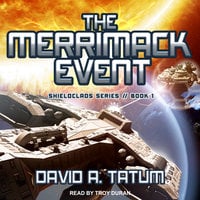 Once every four years, the Earth Alliance Naval Academy is included in a war game . . . or rather the Wargame: On a distant frontier colony, cadets must repair, recommission, and crew a fleet of old, mothballed warships for a simulated fleet action against a group of seasoned veterans using top-of-the-line warships.

After some meddling on the part of the Admiralty, many of the Academy's best are assigned to the oldest, smallest hulk in the Wargame, the unfortunately named corvette Chihuahua. Thanks to a genius engineer, an Army veteran loaned to the Navy for the war game, and an unconventional captain, they make a new discovery which turns her into the most valuable warship in the fleet: The first ever Shieldclad warship.

The crew abruptly finds itself center stage in a real combat action, however, when Earth is attacked by an unknown foe, and a lone squadron of these once-mothballed ships is the Alliance's only hope to respond . . .