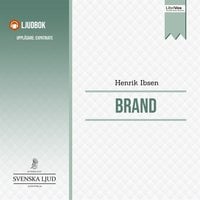 Inflamed by what he saw as his Norwegian homeland's shocking betrayal of Denmark after the Prussian invasion of Danish territory, Ibsen wrote "Brand" as an indictment of human complacency and rigidity of mind. Composing this "dramatic poem" from his self-imposed exile in Italy, Ibsen had long agonized over the stodgy provincialism of his countrymen, but the abandonment of Denmark took on the dimensions in his imagination of a human tragedy far surpassing his own personal experiences. Brand is a priest who refuses to compromise, at the cost of great suffering to others, and who lives by unrealizable ideals. The play revolves around a cast of remarkable characters, such as Gerd the mad peasant girl with delusions of God; Ejnar the complacent artist; and Agnes the devoted lover. Ibsen's breakthrough work, "Brand" could be seen as the true beginning of Ibsen's career, and although (or because?) it was at the time the most fiercely-debated work of literature in Scandinavian history, it always remained one of the playwright's favorite productions. The true genius of the work lies in the judicious balance of its indictment of philistine complacency and its warning against intolerant zealotry. The ambiguous character of Brand himself, principled and heroic while flawed, was seen by Ibsen as representing himself at his best. "Give Nothing, or give All," said Brand, over and over, with stirring consequences.. Henrik Johan Ibsen was a major 19th-century Norwegian playwright, theatre director, and poet. He is often referred to as "the father of realism" and is one of the founders of Modernism in the theatre. His major works include Brand, Peer Gynt, An Enemy of the People, Emperor and Galilean, A Doll's House, Hedda Gabler, Ghosts, The Wild Duck, Rosmersholm, and The Master Builder. He is the most frequently performed dramatist in the world after Shakespeare, and A Doll's House became the world's most performed play by the early 20th century. Several of his plays were considered scandalous to many of his era, when European theatre was required to model strict morals of family life and propriety. Ibsen's work examined the realities that lay behind many façades, revealing much that was disquieting to many contemporaries. It utilized a critical eye and free inquiry into the conditions of life and issues of morality.