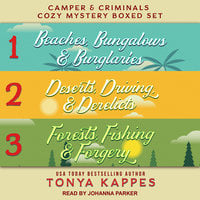 Follow Mae West as she searches for clues to bring killers to justice in the Campers and Criminals Cozy Mystery box set.

Beaches, Bungalows, and Burglaries: Mae West, a far cry from the Hollywood actress, has been thrown for a loop. Her plush lifestyle in the big city of New York comes to a screeching halt after the FBI raids her mansion and arrests her husband, Paul West, for a Ponzi scheme that rips people out of millions of dollars.

Deserts, Driving, and Derelicts: Mae has grown to love her RV community and now that she's found a place to call him, she's not going to let anybody ruin it. Mae throws all of her heart and amateur sleuthing skills into bringing the real killer to justice.

Forests, Fishing, and Forgery: Happy Trails Campground is at the center of a murder in which campers as well locals are suspects. It looks likely that a local resident is responsible for the dastardly deed since the victim is the one person who had the power to shut down the national park, which would be devastating to Normal's small businesses.