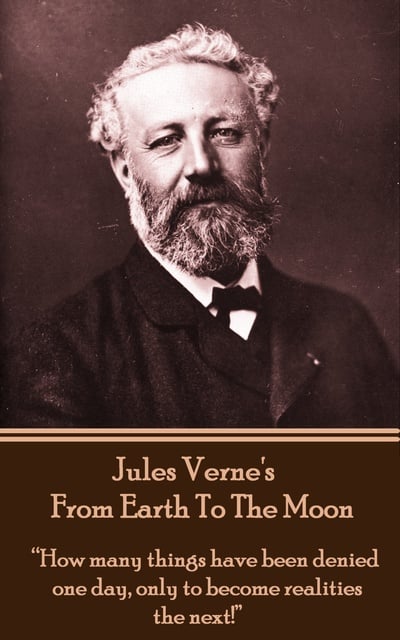 From The Earth To The Moon: “How many things have been denied one day, only to become realities the next!”

From The Earth To The Moon: “How many things have been denied one day, only to become realities the next!”

Jules Verne is a very prolific nineteenth-century French writer whose numerous works are believed to establish the pillars of the science fiction genre. Many of his ideas and fanciful conceptions predicted actual scientific realizations of the twentieth century. In From the Earth to the Moon (1865), the story takes place in America after the American Civil War and revolves around the characters of a “Gun Club” president and his competitor in the weapon industry. Together with a Frenchman, they make a huge space cannon with the objective of shooting them in a projectile to reach the Moon. They decide the place for the launch to be in Tampa Town, Florida, thus anticipating the installation of Kennedy Space Center in Florida after almost 100 years. The remarkable thing about Verne’s narrative is the minute details and sophisticated calculations that he provides which are very close to reality. By the end of the novel, and after a series of misunderstandings and conflicts between the different members of the team, they finally succeed in building the cannon. The projectile is launched carrying three astronauts, yet the narrative ends and the team’s fate remains unknown. However, Verne provides his readers with another novel entitled Around the Moon as a sequel to From the Earth to the Moon.