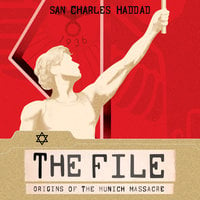 The File: Origins of the Munich Massacre

Three people living in Tel Aviv, Haifa, and Jerusalem embark on distinct journeys that converge at "the file"; their efforts to admit Palestine to the Olympics in the early twentieth century. Their pivotal roles in history have been purposely omitted from official record, kept secret, or forgotten.

Why? Because of the "Nazi Olympics" in 1936 in Berlin. And because of the death in 1972 of eleven Israeli Olympic athletes in the Munich Massacre.

This book narrates the previously untold history of a Palestine Olympic Committee recognized before the creation of the State of Israel in 1948. It sheds light on some of the darkest events in sport history, exposing secretive relationships behind the doors of the Jerusalem YMCA, Nazi agitation, arrests, internments, and other intrigue in the complicated history of Israeli and Palestinian sport.

Consultant and researcher San Charles Haddad weaves a true and masterful tale of forgotten personalities in a conflict characterized by unabated venom, bringing hope and new questions in his wake. What will be the future of Israel and Palestine, and how might sport play a restorative role in the twenty-first century?