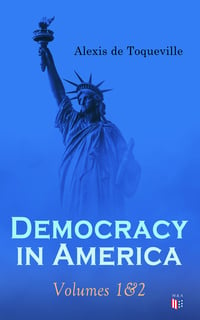 Författare: Alexis de Toqueville
Format: E-bok
Engelska
"Democracy in America" represents a world classic of the political thought which examines the democratic revolution that had taken place worldwide at the time. The main focus of this two volume book is an analysis of why republican representative democracy has succeeded in the United States. Tocqueville discuses on the future of democracy in the United States as well as possible threats and dangers to democracy.

Alexis Charles Henri Clérel, Viscount de Tocqueville (1805-1859)was a French political scientist, historian and diplomat. He was best known for his works "Democracy in America" and "The Old Regime and the Revolution". Tocqueville was active in French politics, first under the July Monarchy and then during the Second Republic which succeeded the February 1848 Revolution.
Översättare: Henry Reeve
Mer info om e-boken:
Förlag: Madison & Adams Press
Utgiven: 2018-03-19
ISBN: 9788026884989
Engelska
Kategori: Historia
USA

On Democracy in America: Volume 1

The Restaurant at the End of the Universe

The Battle of Grunwald: The History and Legacy of the the Polish-Lithuanian-Teutonic War's Decisive Battle

U.S. Government, President's Commission on the Assassination of President Kennedy

American Slavery: History in an Hour