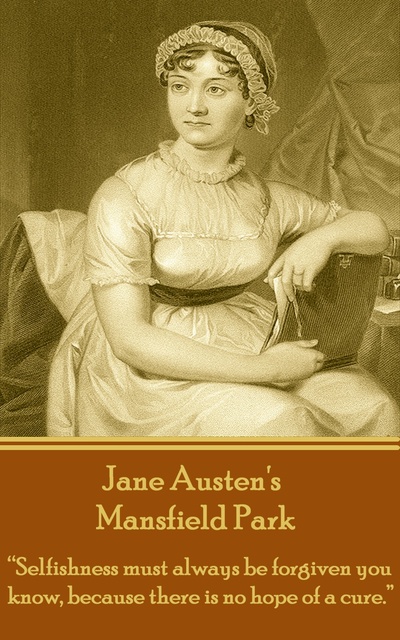 Mansfield Park: "Selfishness must always be forgive you know, because there is no hope of a cure."

Mansfield Park: "Selfishness must always be forgive you know, because there is no hope of a cure."

The protagonist in Jane Austen’s Mansfield Park is Fanny Price, a young girl who is raised in the house of her wealthy uncle, Sir Thomas. She ultimately falls in love with her cousin Edmund, the only one in the household who does not look down on her for her inferior social class. When Edmund starts to develop a relationship with his other cousin Mary who is already engaged, Fanny is seriously worried. However, her worries soon vanish when she realizes Mary’s relationship with other men. In the absence of Sir Thomas, who has gone to visit his plantations in Antigua, the group of young cousins decide to perform a romantic play which enables Henry, Mary’s brother, to flirt with Maria, one of Sir Thomas’s daughters. Henry later tries to seduce Fanny in a playful way, yet he soon falls in love with her. When he proposes to her she rejects him for the multiple affairs that he often engages in. This disappoints Sir Thomas who thinks that Fanny should not miss the opportunity of such an advantageous match from a superior social class. Edmund eventually realizes Fanny’s unique kindness and decides to marry her. By and large, Mansfield Park is an investigation of moral and social conventions of early nineteenth-century Britain. We’ve also included a concise and informative biography of Jane’s works and life at the end of the book. We hope it helps to give a little context and colour about how her life interacted with her art.