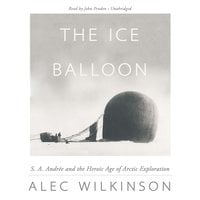 In this grand and astonishing account, Alec Wilkinson brings us the story of S. A. Andrée, the visionary Swedish aeronaut who, in 1897, during the great age of Arctic endeavor, left to discover the North Pole by flying to it in a hydrogen balloon. Called by a British military officer “the most original and remarkable attempt ever made in Arctic exploration”, Andrée’s expedition was followed by nearly the entire world, and it made him an international legend.

The Ice Balloon begins in the late nineteenth century, when nations—compelled by vanity, commerce, and science—competed with one another for the greatest discoveries and newspapers covered every journey. Wilkinson describes how in Andrée several contemporary themes intersected. He was the first modern explorer—the first to depart for the Arctic unencumbered by notions of the romantic age and the first to be equipped with the newest technologies—but no explorer had ever left with more uncertainty regarding his fate, since none had ever flown over the horizon and into the forbidding region of ice.

In addition to portraying the period, The Ice Balloon gives us a brief history of the exploration of the northern polar regions, both myth and fact, including detailed versions of the two record-setting expeditions just prior to Andrée’s—one led by US Army lieutenant Adolphus Greely from Ellesmere Island, the other by Fridtjof Nansen, the Norwegian explorer who initially sought to reach the pole by embedding his ship in the pack ice and drifting toward it with the current.

Woven throughout is Andrée’s own history and how he came by his brave and singular idea. We also get to know Andrée’s family, the woman who loved him, and the two men who accompanied him—Nils Strindberg, a cousin of the famous playwright, with a tender love affair of his own, and Knut Fraenkel, a willing and hearty young man.

Andrée’s flight and the journey—based on the expedition’s diaries and photographs, which were dramatically recovered thirty-three years after the balloon came down—along with Wilkinson’s research, provide a book filled with suspense and adventure, a haunting story of high ambition and courage made tangible with the detail, beauty, and devastating conditions of traveling and dwelling in “the realm of Death”, as one Arctic explorer put it.