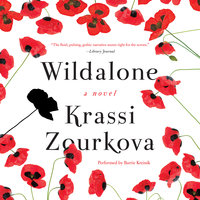 In this enchanting and darkly imaginative debut novel full of myth, magic, romance, and mystery, a Princeton freshman is drawn into a love triangle with two enigmatic brothers, and discovers terrifying secrets about her family and herself—a bewitching blend of Twilight, The Secret History, Jane Eyre, and A Discovery of Witches.

Arriving at Princeton for her freshman year, Thea Slavin finds herself alone, a stranger in a strange land. Away from her family and her Eastern European homeland for the first time, she struggles to adapt to unfamiliar American ways and the challenges of college life—including an enigmatic young man whose brooding good looks and murky past intrigue her. Falling into a romantic entanglement with Rhys and his equally handsome and mysterious brother, Jake, soon draws Thea into a sensual mythic underworld as irresistible as it is dangerous.

In this shadow world that seems to mimic Greek mythology and the Bulgarian legends of the Samodivi or “wildalones”—forest witches who beguile and entrap men—she will discover a shocking secret that threatens everything she holds dear. And when the terrifying truth about her own family is revealed, it will transform her forever . . . if she falls under its spell.

Mesmerizing and addictive, The Wildalone is a thrilling blend of the modern and the fantastic. Krassi Zourkova creates an atmospheric world filled with rich characters as fascinating and compelling as those of Diana Gabaldon, Deborah Harkness, and Stephenie Meyer.