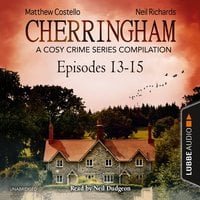 A Lesson in Murder

When Jack and Sarah are called in to investigate mysterious pranks at an exclusive girls’ private school, it seems at first that it might be the work of a few mean pupils with a grudge. But things quickly turn serious when a popular teacher meets a sudden, violent death. Now, with murder in the air, Jack and Sarah have their own lessons to learn about the Cherringham Girls School, its dark secrets, and who wanted that teacher dead before they learned the truth.

The Secret of Combe Castle

When the penniless FitzHenrys, proprietors of the rundown Combe Castle Heritage Site, find themselves victims of a threatening campaign to oust them from their ancestral home, Jack and Sarah are called in to track down the culprit. But nothing is what it seems at this castle—from the curious and unnerving waxwork displays of the “Odditorium” to the in-laws and neighbors who can’t wait to see the last of aristocratic couple. Soon Jack and Sarah discover that truth is often stranger than fiction, and in Combe Castle things do indeed go bump in the night.

Dylan McCabe—a livewire Irish laborer on a rushed Cherringham building project—has been making noises about the site’s lack of safety. When he’s discovered dead after a fall, it seems that Dylan’s own warnings were all too true—that is, until Jack and Sarah get involved, and suddenly what looks like an accident becomes a case of cold-blooded murder. With a festive Cherringham Christmas just days away, Jack and Sarah set out to find the culprit and soon find their own lives threatened.