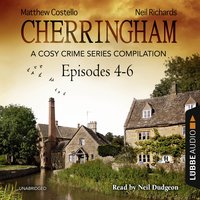 Two Cherringham locals, roaming a farm with metal detectors, discover an amazing treasure—a silver Roman plate worth millions. They must share the reward with both the farmer and the owner of the land, the formidable Lady Repton, but there will be plenty for everyone. That night, while the village pubs do a roaring trade, archaeologist Professor Peregrine Cartwright offers to keep the plate secure in his massive wall safe. But when the British Museum expert arrives to verify the find next morning, the safe is empty! Police blame a notorious gang of art thieves operating in the county, But Jack and Sarah have other suspicions …

Cherringham is devastated. Otto Brendl, the likable old man who had hosted the classic Punch-and-Judy show for the kids each summer, has died suddenly of a heart attack. But while the memorial service is being planned, Jack becomes suspicious that Otto wasn’t just the friendly man next door. Maybe there’s more behind the heart attack? Soon Jack and Sarah are on the trail of a particularly sinister murderer—and together they will find that there’s not only one kind of justice.

The Curse of Mabb’s Farm

Up on the hill above Cherringham sits Mabb’s Farm. It’s a place with a dark history dating back to the seventeenth century—a time when locals lived in fear of the devil, and witches were burnt at the stake. Legend has it that the farm—and all who live there—are cursed with misfortune. But is it really a curse when this year’s crops fail, the livestock sicken, and deadly fires break out? Or is there a hidden reason behind these dangerous events?