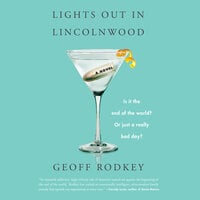 Lights out in Lincolnwood

A mordantly funny, all-too-real novel in the vein of Tom Perotta and Emma Straub about a suburban American family who have to figure out how to survive themselves and their neighbors in the wake of a global calamity that upends all of modern life.

It’s Tuesday morning in Lincolnwood, New Jersey, and all four members of the Altman family are busy ignoring each other en route to work and school. Dan, a lawyer turned screenwriter, is preoccupied with satisfying his imperious TV producer boss’s creative demands. Seventeen-year-old daughter Chloe obsesses over her college application essay and the state tennis semifinals. Her vape-addicted little brother, Max, silently plots revenge against a thuggish freshman classmate. And their MBA-educated mom Jen, who gave up a successful business career to raise the kids, is counting the minutes until the others vacate the kitchen and she can pour her first vodka of the day.

Then, as the kids begin their school day and Dan rides a commuter train into Manhattan, the world comes to a sudden, inexplicable stop. Lights, phones, laptops, cars, trains…the entire technological infrastructure of 21st-century society quits working. Normal life, as the Altmans and everyone else knew it, is over.

Over four transformative, chaotic days, this privileged but clueless American family will struggle to hold it together in the face of water shortages, paramilitary neighbors, and the well-mannered looting of the local Whole Foods as they try to figure out just what the hell is going on.