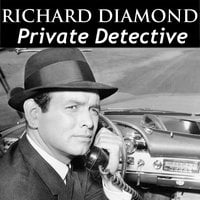 Richard Diamond, Private Detective is a detective drama which was on radio from 1949 to 1953 and on television from 1957 to 1960. Dick Powell starred in the Richard Diamond, Private Detective radio series as a rather light-hearted detective who often ended the episodes singing to his girlfriend, Helen (played by Virginia Gregg). It began airing on NBC on April 24, 1949, picked up Rexall as a sponsor on April 5, 1950, and continued until December 6, 1950. The shows were written by Blake Edwards. Its theme, "Leave It to Love", was whistled by Powell at the beginning of each episode.

Because Dick Powell was known for musical comedies prior to his appearance as Philip Marlowe in Raymond Chandler's Murder, My Sweet (1944) and because he was a detective who sang in Richard Diamond, Private Detective, some regard this radio series as an influence on the character of Philip E. Marlow (Michael Gambon) in Dennis Potter's chandleresque The Singing Detective (1986).