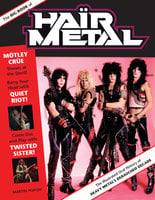 The Big Book of Hair Metal

In the 1980s, heavy metal went mainstream. The dark themes and brain-busting riffage of bands like Black Sabbath and Deep Purple suddenly fell out of favor—replaced by a new legion of metalheads whose themes of girls, partying, girls, drugs, and girls were presented amid shredding solos and power ballads and who were somehow more acceptable to the masses.

In this ultimate guide to the subgenre, acclaimed heavy-metal journalist Martin Popoff examines hair metal in an all-encompassing oral history jacked up by a kaleidoscope of outrageous and previously unpublished quotes, anecdotes, photos, and memorabilia.

The Big Book of Hair Metal features the observations of dozens of musicians, producers, promoters, label execs, and hangers-on in examining hair metal’s rise and fall as well as all the bands that kept Aqua Net in business through the Reagan recession: Twisted Sister, Bon Jovi, Poison, Mötley Crüe, Ratt, Warrant, Great White, Whitesnake, Cinderella, Vixen, Skid Row, L. A. Guns, Guns N’ Roses, and dozens more. In crafting a narrative of hair metal, Popoff also examines the factors that contributed to the movement’s rise (including MTV, Reagan’s “morning in America, ” and a general move toward prudish morals); the bands that inspired it (the Sweet, New York Dolls, Alice Cooper, and KISS, for a start); and the scenes that nurtured it (the Sunset Strip, anyone?). The ride finally ended circa 1991, when hair metal was replaced by grunge, but what a ride it was. Here it is in all of its primped-up glory.